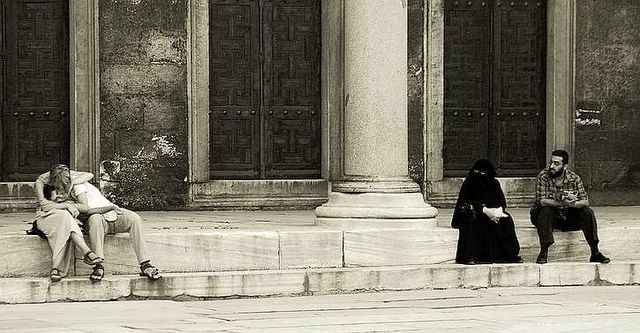 Which world do you want to live in?

This may strike a cord or a nerve for some readers but this image really struck me. In looking at the stark contrast of the image I began to ponder the different paths our World could potentially take. Will we follow the path of freedom or will we turn down the path of totalitarianism? Observation, intuition and current events unfortunately point to the path of totalitarianism. If that is the case the only amusing observation is that those who lead the march down that path will be the first sacrificed on it’s Alter.

A Woman’s Self Defense Instructor and Advocate it amazes me the circular logic that I encounter. We fight for Women’s rights but then we don a head scarf to show support for Muslim women. In Turkey last week 125,000 people turned out to protest a Constitutional Amendment to lift the ban on head scarves on University campuses. The President, an observant Muslim, lauded the amendment and is expected to sign it this week. Prime Minister Recep Tayyip Erdogan called the ban a trial for young Muslim women who are forced to remove their traditional head scarves at campus entrances. Erdogan, whose Justice and Development Party has ties to Islam went on to say, “We will end the suffering of our girls at university gates”.

On the other side of this controversy the Republican People’s Party said it would appeal to the Constitutional Court. “This is a Black Revolution. The head scarf is a political symbol,” said lawmaker Canan Aritman. “We will never allow our country to be dragged back into the dark ages.” Nesrin Baytok, another Republican legislator, said approval of the law would turn Turkey into Afghanistan in a domino effect. Now look back up at the image…which world do you want to live in? Oh, that is right I am sure you are thinking that this can’t happen where you live! There is nothing to worry about. Perhaps you should check the recent news from England.

Perhaps I should begin to teach women in my self-defense classes that if they only don a head scarf they won’t need to fear attack…or perhaps I should continue to teach them how to disable their attackers so they can continue to walk down the street with their heads held high.