WHAT IS KYOKUSHIN KARATE?

Kyokushin Karate is a powerful style of Martial Art, founded by the legendary Karate master Masutatsu Oyama.  Kyokushin combines both traditional and freestyle training methods into a practical and effective self defense system that is suitable for men, women and children of all ages.  The biggest difference with other styles is that Kyokushin Karate focuses on full-contact power and real-world applicability.  Karate is both an art and philosophy; it is not a religion.  Kyokushin remains traditional in it’s training methods, protocol and beliefs, yet avoids rigid guidelines to allow its practitioners to grow and progress, in turn contributing to the evolution of Kyokushin.

Kyokushin was founded in 1953 by the late Grand Master Mas Oyama (7/23/1923-4/26/1994). After studying the Martial Arts for two decades, training in many different forms; from Korean to Chinese and Japanese styles as well as American boxing and self-defense tactics (see linage chart below).  Mas Oyama created Kyokushin from what he believed to be the essential elements of each style, and contributed his own practical methods for the application of the ancient forms to suit 21st century practitioners.  Mas Oyama toured the world performing incredible physical feats to demonstrate the virtues of his new style.  Prior to his death; Mas Oyama failed to leave a clear successor leading to the fracturing on the Kyokushin style into various sects with each claiming their rights.

KYOKUSHIN, (Pronounced: “Co-Koo-Shin”) means Ultimate Truth.  Founded in the Bushido way; Kyokushin practitioners must be prepared to do or give everything in every situation; typically waging an internal battle of ‘Self’ to achieve your goal.  Only with Iron discipline and the correct mentality is this possible to achieve.  Practitioners seek the ultimate truth by confronting their self contrasted with reality; without shortcuts or false props, through humility and clarity of mind we find our strength.  The journey of Kyokushin (Ultimate Truth) bears the fruits of self-esteem, confidence, calmness of mind and mastery of body.

Kyokushin is known throughout the Martial Arts world as The Strongest Karate, not only for the reputation of it’s top fighters but also the rigorous and thorough training methods. Kyokushin famous for its powerful techniques leveraging physics derives its spectacular force from points and circles which create enormous strength.  It is this circular motion that distinguishes Kyokushin karate from other karate styles that rely on simple linear motion. 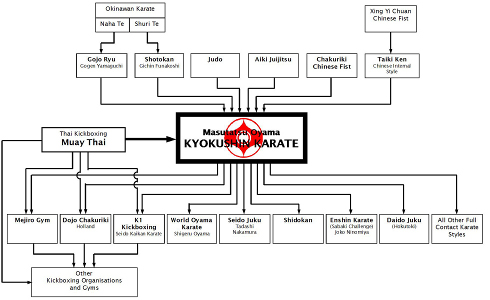