All that is necessary for the triumph of evil is that good men do nothing.

This phrase seems increasingly relevant for me personally. For a number of years I have been silent mostly due to personal and medical problems but also because I had become complacent. Complacency I am finding is perhaps one of life’s biggest sins. There were reasons for my complacency but that doesn’t excuse my continued silence. I won’t detail the fights I am fighting here as it isn’t relevant, what is relevant is the need to stand up and be counted. Of course the above quote would leave many wondering at the term evil, for along with complacency comes acceptance. Our society has reached a critical point in its acceptance that I fear it has gone to far to repair. I fear this for the Nation but more importantly for the individuals I meet. We have been so socialized for so long that any stance other then one of acceptance is shunned.

Don’t believe me? The next time you are among friends try to bring up a socially unacceptable topic, but know your stuff so you can argue your point. You will quickly find your friends break into 4 distinct groups. The first group will argue with you against all logic and reason; these friends fight this way to preserve the world they have created around them. The second group will argue to a point and has two subgroups. One which upon seeing your logic will either shut down and ignore you (leave the room) or simply agree to disagree. The third group will within minutes of the discussion tune you out, they will enter a zone of non conflict where they can stay safe and unchallenged with their beliefs. The forth and last group will agree with you, some will do so silently for fear of becoming a target of the first group, others will agree openly even if they are not sure of their reasons.

This is increasingly hard in our world of personal morality since we each define our evil and good. Imagine the Chaos of a world where each of us define a good and evil based on our wants and desires! Now look around you and realize that Chaos is almost here. Look around you. Most people are like a ship without a rudder. This is the first step to the triumph of evil, Acceptance. Good men, silently moving on the wheels of the inevitability of their own inaction. The second step to the triumph of evil is Cowardice. In a state of acceptance good men fear retribution if they speak up and take a stance on counter to someone else’s actions or belief. Speaking up is only allowed in extreme cases where acceptance hasn’t been adopted yet. Acceptance and the following cowardice leads to change away from any social norms or structure. This leads to the third step to the triumph of evil, decadence. When we are all accepting and all resistance is removed because rampant cowardice stepping into a decadent lifestyle is easy, even comfortable.

People say that reality isn’t that simple. People believe there are shades of gray. Shades of gray makes the transition into Chaos almost comfortable, it just takes time. 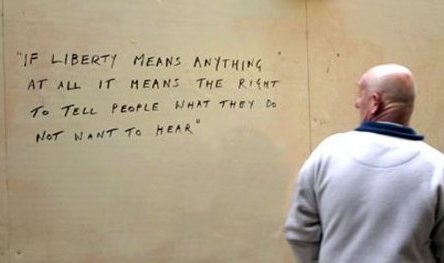 There is an increasingly short list of things that are unacceptable. Things that for centuries were taboo are suddenly vogue. We could learn much from Roman history but we will not, for those of us that read history, it tells us that much! Yes I believe in a much more black and white world, gray is either the exception or doesn’t exist, not the norm. This in itself is viewed as an extreme stance in today’s world. I’m comfortable with that. People that are comfortable with gray don’t think through the logic of their reasoning. Start with the extreme case and work your way back, the answer is usually very clear and never gray. You must train your mind to find the clear path of logic and reason. Basically continue to ask the question why until you fully understand the/your reasons. Our Pop culture mocks this type of thinking and will label you as the troublemaker.

Well, this turned into a rather bleak discussion of mans progression to evil if he isn’t vigilant. But then I think of another Edmund Burke quote, “Never despair; but if you do, work on in despair“. Freedom is never given voluntarily by the oppressor any more then the oppressed knowingly have their freedom taken. And so I will continue to fight against acceptance, cowardice and decadence in the hopes of stopping the progression of evil in this world. Perhaps I will inspire other to speak up and say no more! Perhaps you will join me in this fight?

Which of the four groups do you fall into?! To put a little different perspective to all this…

I’m not concerned about all Hell breaking loose, but that a part of Hell will break loose. It’ll be much harder to detect.