Thoughts on the Wall Street Occupation 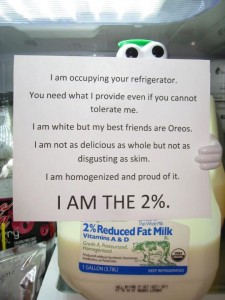 This post is a little late and I almost deleted it but the movement looks like it coming back with the warmer weather.  While I doubt the OWS movement ever take serious hold, I will post this…

Let me say I am encouraged to see people finally getting involved in the process of government.  Unfortunately these people are NOT getting involved in the process of government.  When this movement started I read their manifesto, I like to be informed and understand what I am talking about.  The OWS movement has so many slogans that it is easy to find something to agree with.  That is part of problem, lots of platitudes without a lot of detail.  The danger is you gain the support of the masses where everyone of the “masses” has a different understanding of what they are supporting.  Groups that have used this method of motivating people to their cause are among the most notorious in history.  The communist uprising in Russia and China had similar beginnings, interestingly the OWC movement is openly run by self-proclaimed communists and anarchists.

In reading the OWC manifesto I continued to read the comments section and was struck by the response to people who were critical of the movement in a non-hostile way.  I found the ‘Liberations’ comment slightly disturbing as when he/she states “…to go further than the founding fathers did. It aspires to correct the short-comings of back then…” and then states “…more negative and hateful comments are on the way, with the sole intent of discouraging and dividing us. However we already know about these efforts and shall not let them affect us.”.  It would appear that one of the short-comings of the founding fathers was the freedom of speech.  Rather than listening to each comment and applying critical thought he/she wants us to close our eyes and blind ourselves to the views of others.  That is the wish of dictators/elitists/fascists, to silence anyone who disagrees with them.  That is how you motivate a mob, not change.

Anyone who suggests the work of the founding fathers is not valid or needs to be reworked does not have the best interests of this country or freedom at heart.  Freedom, a word many use but few mean.  Often those speaking mean ‘my idea of freedom’ where you must live a certain way.  Not that we deserve our freedom, increasingly people are willing to hand over their freedoms without even a thought or objection.  Most people do not even carry out the one responsibility they have for the freedom, to vote.  Yet, that does not negate our right to freedom, let us remember that it was a minority that forced us down the path to freedom.  But do the 1% have the same selflessness of the founders?  Are they truly fighting for liberty for all or for their own idea of liberty?

The problems we face today are of our own making.  While I am supportive of these “gatherings” I am not supportive of their approach; they seek to blame others.  Everything that is happening today is a result of a complacent “We the People” who have failed to watch dog their elected officials or who have been all to happy to turn a blind eye for some personal gain or benefit (jobs/SSN/unemployment benefits/food stamps/health care/etc).

This movement does not need to occur outside the system, it should change the system from within, unless you feel “We the People” would never support what you are suggesting.  Which I believe is the case.  The OWS movement don’t seem to understand how our system works or how to affect change in it.  Most people involved support the very corporations they rally against through the products they use.  I am the first one to admit that the odds are not in our favor the system is corrupt but not broken.  However, I have never shied away from a fight with bad odds when it meant standing up for what was right.  Being right is important, being right is difficult, but without it the foundation of your movement is weak.  The OWS movement was supposedly started as a retort to the Tea Party movement however the Tea Party has maintained a unified voice in a non-violent, non-destructive manner.

Those are my thoughts, perhaps this will change the way some people look at the problem.  But then again, no need to listen and apply critical thinking, since I do not agree 100% lockstep with you, my voice doesn’t matter.  Close your ears and carry on…