Note: This article was written by director_mitch A.K.A. the Window Manager and is cross-posted on his site.

Tae Kwon Do, probably more than any martial art, emphasizes kicking – a typical TKD match will be over 80% kicking. In order to win you need kicks that are high enough to hit an opponent’s head. After all, if all you can throw are waist-high kicks, you become pretty easy to defend against. The second thing you need is mastery of the spinning kicks – back kick, spinning-heel, and tornado kick – which help in misdirection and counter-attack.

And in order to kick high and spin, flexibility and balance are a prerequisite. As I advanced into the Tae Kwon Do “middle belts”, I felt that in order to progress into the upper ranks that these two areas really needed improvement. I was certainly developing these skills as a part of my regular TKD training, but I started to search for a way to accelerate their improvement.

For flexibility, yoga was an obvious field of study. I had heard about the popular Bikram “hot yoga” for some time and thought I would give it a try. But I entered the yoga studio with some trepidation, expecting to find a bunch of aging hippy vegetarians. Instead I found an attractive young lady sitting behind a computer. Not wanting to seem too granola, I immediately declared “I’m hoping to improve my martial arts skills and thought I would try some yoga.”

“Yes,” she replied, “we get one of you signing up about once a month. In fact, John is getting ready for our next class and is a martial artist. You should talk to him.”

Soon enough I was talking to John, a seven-year practitioner of Tai Chi. He extolled the virtues of yoga and how it improved his martial art practice, and encouraged me to join. Fifteen minutes later I was standing next to him for my first class. Four months later I consider yoga a extension of my martial arts training and go at least once – usually twice – a week. I consider it so much an extension of my TKD practice that I sometimes catch myself unconsciously bowing as I enter the yoga studio.

My flexibility has definitely improved, but the largest improvement has been in my balance, where the improvements have been considerable for such a short period of time. My back kick went from mediocre to very good, and my spinning-heel went from non-existent to something I am comfortable using in a sparring match.

Bikram yoga is a set of twenty-six postures that are done in the same order in every class. It is what I call the “balancing series” of poses that I think has helped my martial arts the most to date: 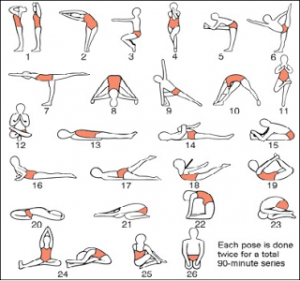 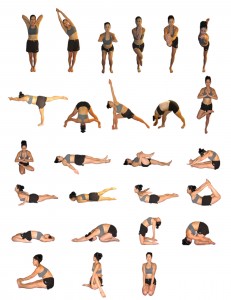 Reference Bikram South Pasadena – Postures
These poses may not look that hard, but remember that you hold the poses. Twice. On standing-head-to-knee the first pose is for sixty seconds. If you can hold these poses for that long, throwing a back-kick and having your body extended in something that approximates the balancing stick for a fraction of a second seems easy.

Another difference in yoga is that when balancing on one leg, the standing knee is locked with the thigh contracted. TKD kicks are done with the standing leg slightly bent, improving balance and stability, so again I find yoga harder than the martial arts for balance, meaning mastery in yoga makes for ease in the martial arts.

The flexibility improvement promised in yoga is also apparent, but that improvement is coming more slowly and will take a longer period of time to master.But like martial arts, yoga is a life-long practice, with true mastery always being just beyond the grasp. I consider them complementary arts and highly recommend yoga to anyone who wants to improve their martial arts skills.