There’s a new game in town…

Have a dispute to settle? Can’t decide what movie to see? Well you could try the old rock-paper-scissors game, but that seems kind of lame.  Or you could be cool and play Zombie-Robot-Monkey-Pirate-Ninja-Zombie instead!  Call it ZRMPN (Zerm-Pin) for short and sound cool too!  Here are the details: 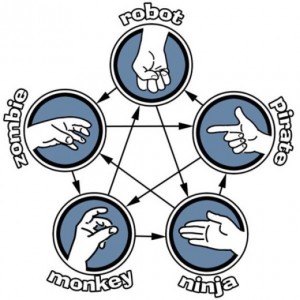 Here are the rules: